A Missourian Commentary – Women in the Military

J. Karl Miller is my “opposite” on the Columbia Missourian’s Opinion Page every Thursday, Wednesday’s online. On March 8, 2013, Karl wrote that Article 60 of the Uniform Code of Military Justice should not be changed and the case of an officer convicted of rape having the conviction vacated by a senior office was proper and should not be questioned.

Sorry, Karl, women must be equal partners in the military

Like the others, Karl and I mix well under the right circumstances. We honor and support the other’s opinion while still disagreeing about the politics. There are also times we don’t. Karl’s May 9 column is the second time this year when we disagreed on the same issue — women serving in the military.

On Feb. 6, Karl claimed that the inclusion of women into combat roles would somehow destroy the U.S. armed forces. “The notion of a lady ‘G.I. Jane’ engaging in mortal combat with seasoned male soldiers is a pipe dream — a fantasy of the left’s irrational agenda of total gender equality.”

I am politically offended by the accusation that my liberal ideas of gender equality are somehow “irrational” and a “pipe dream.” I have a number of social contacts with women who proudly serve in the Israeli armed forces, including a fighter pilot or two. Ask them if the idea of women’s equality and serving in combat roles is an irrational pipe dream.

Last week Karl wrote that there should be no change to Article 60 of the Uniform Code of Military Justice. The controversy stems from Lt. Gen. Craig Franklin’s dismissal of Lt. Col. James Wilkerson’s court martial conviction for sexual assault.

Karl’s position on permitting a commanding officer to simply vacate a conviction by a military tribunal for sexual assault is indefensible. Karl seems to believe that any change to Article 60 is unnecessary and contrary to the discipline of the military. Unfortunately, others agree with Karl, and I believe nothing could be further from the truth.

No one questions the nature of sexual assaults in the military. This could not be better demonstrated than by the arrest of Air Force Lt. Col. Jeff Krusinski for groping a woman in a parking lot. This matter becomes more scandalous; Krusinski is the “Air Force official in charge of its sexual-assault prevention program.”

Some information about sexual abuse in the military: It is estimated that in 2012 more than 26,000 men and women experienced sexual discriminationand/or abuse in the armed forces. Of those, men represent 53 percent. Those who did make formal accusations of unwanted sexual contact or abuse, including rape, in 2012 increased about 6 percent from 2011.

I wonder if Karl’s position would be different if it were a man who was sexually assaulted and the case was dismissed.

To me, the conservative (I am not speaking political conservative here) position in support of a “men-only club” is outdated and screams for change. More accurately, the “straight-men-only” club. It is nothing more than belittling women and gays who serve in our military than telling them that they do not belong based solely on gender or sexual orientation. 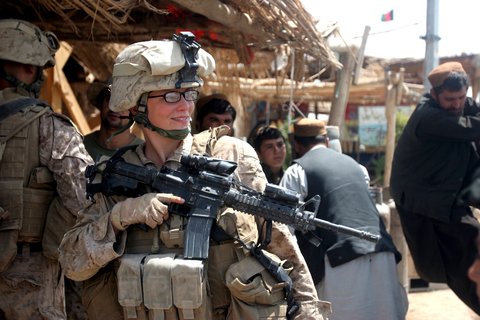 The U.S. military came into the second half of the 20th century kicking and screaming when Harry S. Truman said that there will be no discrimination in the armed forces, that blacks and whites were to serve in the same units, sleep in the same barracks and fight side-by-side. They screamed through Korea and into Vietnam. Four decades later, we honor our military leaders of African heritage as we would those of Latino, Pacific Rim or European heritage.

It takes time for change to happen and it will, even with Karl kicking and screaming that it can’t.