As I am writing this, the Supreme Court’s “Short Slips” concerning DOMA and California’s Proposition 8 are being delivered. Others will be more eloquent and precise as to the interpreting the Court’s rulings and who stood on which side of each.

Both rulings appear to favor marriage equality. But that may not be the case.

These decisions will not lighten the arguments concerning marriage equality or equality under the law for the religious zealots who believe that their god or gods find same-sex relations as unholy.

The religious-right will make the arguments that the Courts overstepped their boundaries and are creating law, that the Constitution is not being honored, and that states’ rights are not being honored. Their fight against marriage equality will continue.

Discussing argument and persuasion concerning the Court’s position and the Constitution with those who use religion as the basis of their position must begin with a warning; don’t get sucked in.

Don’t be drawn into an argument that will essentially be circular in nature.  Atheists, freethinkers, skeptics and others know too well that any discussion concerning religion and the Constitution with evangelicals (Christian, Jewish, Muslim and others) is doomed to frustration. The other side will resort to tactics that will force you to a level of irritation that the argument will become a fight and you will lose.

Ask yourself a few simple questions.  Is the other person changing the subject or revising the question? Are they asking “What if” questions ad nausea in seeking the answer they want to hear? Have they devolved into name calling or lashing out at the Justices who made the majority rulings? Are they forcing an answer without allowing for explanation? Are they talking over you (a tactic used favored by Ann Coulter and other right-wing radicals)? Have they lowered themselves to name calling? 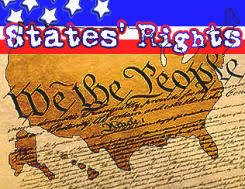 The strongest reaction will be the Court is denying the states to determine their own destinies. This argument is simply from an emotional position and not of fact.

The second will be a religious based argument against either decision, This is simply an attempt to justify personal biblical positions into the Constitution.

In Windsor v. United States the Court ruled that, “Given the Government’s concession… the case should have ended and the appeal been dismissed.” In other words, because the President’s position was not to defend DOMA, the state conceded.

Additionally, the Court made it clear who has jurisdiction as to the definition of marriage. “Marriage laws may vary from State to State, but they are consistent within each State.”

In Hollingsworth v. Perry, the majority ruled, “Petitioners did not have standing to appeal the District Court’s order.” Again, the executive of the state, in this case California’s governors Jerry Brown and his predecessor Arnold Schwarzenegger, elected not to defend Proposition 8.  California, in other words, was the party to have standing to appeal the lower court’s decision on Proposition 8.

In explaining its ruling, Chief Justice Robert’s wrote, “One essential aspect of this requirement is that any person invoking the power of a federal court must demonstrate standing to do so… Standing ‘must be met by persons seeking appellate review, just as it must be met by persons appearing in courts of first instance.’

“As this Court has repeatedly held, such a ‘generalized grievance’ – no matter how sincere – is insufficient to confer standing.”

If one wishes to argue that the President and California’s governors had a legal obligation to defend the respective laws’ validities, so be it. That is a valid argument. But to say that the Court has somehow 1) nullified state’s rights, or 2) nullified the wishes of the people are simply wrong.

Neither decision argued the religiosity of the Constitution.

Neither decision defined the term “marriage.”

Neither SCOTUS decision was based on First Amendment “Establishment” or “Free Exercise” clauses, but a much simpler premise – who is responsible to defend a state or federal law and is such a defense required? Nothing more and nothing less.

Do not get involved in the nonsensical arguments that have so fueled the animosity of the religious right. The secular community does not need that grief. You will not and cannot maintain any form of discussion with a zealot, religious, secular or political.

The religious-right can only argue with their eyes and ears closed and with faith that is truly blind.