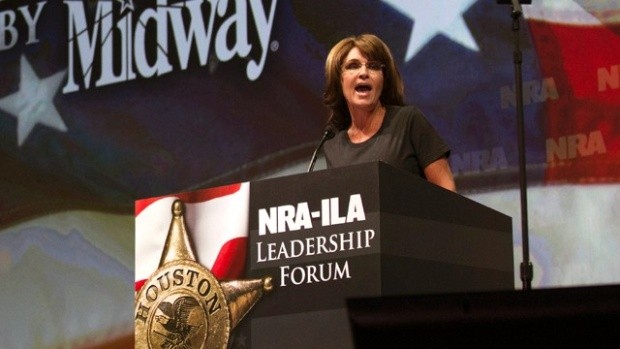 If you have not heard, Sarah suffers from “foot-in-mouth” disease and is now in trouble with the Christian right, middle and left. Yes, she has pissed off everyone.

You see, Sarah was a keynote speaker at the NRA’s “Stand and Fight” rally when she turned her attention to those who with “Jihad” on our wonderful country. It is obvious that she does not know what Jihad actually means, but that is a story for another time.

What she did say was damning enough for the Christian community to come up in arms (pun intended). You see, Sarah still has grandiose plans to take over the world. She said, “Well, if I were in charge, they would know that waterboarding is how we’d baptize terrorists.”

Now why would the Christian community be upset that Sarah wants to convert the heathens to the Christian faith through waterboarding? From the Faithful America web site:

“A former candidate for vice-president can equate torture and Holy Baptism, and one of the nation’s most powerful political lobbies erupts into cheers and applause.”

“For Christians, torture is not a joke or a political punchline, but a ghastly reminder of the suffering of Jesus upon the cross. By equating it with Holy Baptism — the act by which we are united with Christ in his death and resurrection — Sarah Palin is blasphemously twisting our faith into a weapon of hatred and violence. No media outlet should cover her remarks without reporting on how sincere Christians of all theological and political persuasions are appalled.”

I signed the petition. Not because I am a Christian, but because I am a Humanist and and atheist and agree with the Faithful America’s position on torture and the use of religious rhetoric in in what she believes to be a holy war against Christian America.

Aside that the United States was not founded as a Christian nation, we as Americans should be appalled at language directing the word into yet another sectarian war. In fact, it is home grown terrorists, those not associated with the Muslim faith, which we need to worry about. The murdering of Sikhs in Minnesota or the killings by a self-proclaimed neo-Nazi should shed the light on which we need to worry about, or the rancher in Nevada who claims that he does not recognize the federal government.

Torture has not proven to be a successful method of interrogation. We know this and know that torture of any kind is only fuel for further hatred by those who see the United States and her allies as the “evil doers.” Home grown or not.

Atheists, Humanists, freethinkers, agnostics and other heathens need to come together and denounce Sarah for her words, her support of torture and anti-Islamic rhetoric. We need to denounce the members of the NRA for supporting Sarah’s position.

We need to rewrite the statement from Faithful America to include the 21-percent of American who are not of the Christian persuasion to read:

“No media outlet should cover her remarks without reporting on how sincere Americans all theological and political persuasions are appalled.”