January 4, 2018 – Former Minnesota congresswoman Michele Bachmann is in the news again, this time vying for the Republican nomination for the U.S. Senate seat formerly held by Al Franken, now held by Tina Smith (D). That is if God lets her. 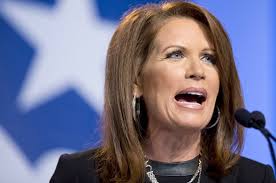 Bachmann told televangelist Jim Bakker that if her “big God” says it is OK to run for the Senate seat in Minnesota, she will. This is the same god that told her to run for president in 2012 in order to make the repeal of the ACA an issue in the debates. She feels that she met God’s mission as if the Christian god could not do this on his/her/its own.

The problem here is not that Bachmann may run for Senate or that she is waiting for her god’s commands, but that the electorate is becoming more polarized into the extremist Evangelical Christians and everyone else. We saw this in the Doug Jones/Roy Moore election in Alabama.

Though Moore was being accused of some horrendous acts of sexual deviance, the right of right-wing of the Evangelical conference saw Moore as a “good Christian” and the accusers as being the evil doers.

Jones won the race by a razor-thin margin, showing that the right-wing Evangelical Christians still have clout in American politics. I do not see his win as the beginning of a Democratic wave in 2018 and beyond, but as a causionary tale.

Bachmann has shown her hand as a political Christian in many cases since her introduction to the nation in 2010, but by far is not the only “Christian” to run for Congress or the presidency. Yet with the polarization of the electorate, she may have a better chance of winning a primary and the Senate seat.

The Christian right, if they win their battle to repeal the Johnson Amendment (prohibiting non-profits, including churches, from campaigning for a political candidate), is much better at organizing their voter base and getting out the vote (GOTV). It will be the GOTV efforts by the Democratic Party and the independents that will keep the Minnesota seat in the hands of the Democrats.

Back to the Jim Bakker Show; hyperbole is not overstated when Bakker introduces Bachmann as one of the “most powerful congresswomen and speakers in America’s history.”  I taught Public Speaking (the infamous Speech 101) and American Political Speech for over 25 years. I can name at least 10 other congresswomen who fall into this category – Michelle Backman is not one of them. Bachmann is a second class orator at best. My personal list starts with Representative Barbara Jordon and her opening remarks at the Nixon impeachment hearings.

But overemphasis seems to be the newest tactic of the Republican Party since Donald Trump started his run for President and continues today from within the White House. The problem remains that the Christian right, those who should be following the biblical laws concerning lying and infidelity, seems to turn blind eyes to those lies. Bachmann continues this oratory blunder during her interview with Bakker.

Bachmann’s appeal to the Christian right remains strong as long as she can promulgate misinformation. She will be able to get out the vote of Evangelicals and other right-wing activists because they are being fed the propaganda that Christians are being targeted by those liberals and atheists. Christians are the ones being harassed.

They seem to forget the words of Jesus Christ (Matthew 22: 20-22) when he said, “Render therefore unto Caesar the things which are Caesar’s; and unto God the things that are God’s.”