September 14, 2018 – I was offered a job in Houston a few years back while I was living in Denver. I lived there for in Houston days before I decided it was not the place for me.

A recent article in the Dallas Morning News reinforced my belief that Texas is not a place for atheists, liberals or supporters of the separation of church and state. 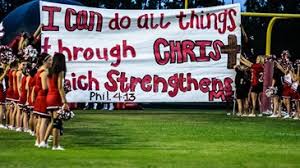 The background is quite simple. Like a lot of towns, Kountze, Texas, north and east of Houston, has a football team. The Kountze Independent School District sanctions the team and its games. The cheerleading squad decided on its own to use religious verses on the banners the team breaks through when entering the stadium for their home games.

The Freedom From Religion Foundation (FFRF) wrote a letter to the district saying that the banners were in violation of the First Amendments Establishment Clause. The district took FFRF all the way to the Texas Supreme Court. Evidently, at every level, the school was found to have NOT violated the intent of the First Amendment’ separation of Church and State.

The courts basically said because the cheerleaders spent their own money and made the signs on their own time, that the school district was not being represented by the school’s cheer squad.

Hiram Sasser, First Liberty’s general counsel and an attorney for the cheerleaders told the Dallas Morning News, “…it’s good to be reminded that these cheerleaders have a right to have religious speech on their run through banners — banners on which the cheerleaders painted messages they chose, with paint they paid for, on paper they purchased.”

Here is the problem. That the school has no financial connection with the signs does not mean it has eliminated the role the cheer squad has in representing the school and its students. The school district is implicit in giving permission for the religious banners to be used.

The conservative courts used the Freedom of Speech and Religion clauses of the First Amendment as the basis of their decision. This is not unlike Masterpiece Cakeshop v. Colorado Civil Rights Commission, the Colorado case where a bakeshop refused to bake a cake for a gay couple’s marriage based solely on the owner’s religious beliefs.

The Texas case has taken six years to decide and has cost the district and the FFRF a pretty penny to contend. But this should not be the end of the process. There is still the federal level with which to compete. If the case sees the light of the United States Supreme Court with Justice Kavanagh in his high seat, we may see the beginnings of the theocracy that the Christian-right has been vying for for decades.

The Texas courts are wrong in their assessment of the facts of this case. It does not matter if private money is used for the religious symbolism on the signs. It does not matter if the cheerleaders made the signs on their own time. The signs are used on school property and the cheerleaders represent the school; therefore, the school district has sanctioned the use of the religious signs.

This mode of thinking does not prevent the cheerleaders to pray or make signs on their own time with their own money. It does prevent them from using the signs on school grounds while representing the school district.

1 Response to Kountze IDS Versus FFRF